How to break up a dog fight!

Sometimes it just happens, your dog simply does not get along with another dog and before you know it the two dogs are fighting. Now if the dogs in the fight are Chihuahuas then fine, it probably won’t be too difficult to pull the two dogs apart, however if they are big dogs it is whole different matter. You have to be able to break it up quickly to avoid the dogs to get injured and at the same time you must avoid getting bitten yourself. This requires some knowledge so here is how to break up a dog fight.

Why do dogs fight?

First of all, why do dogs fight in the first place? There are many reasons for why dogs fight and by understanding the cause of dog fights you can sometimes prevent the fights before they even break out.

Fights can be territorial, that is a dog protects its territory, an example of this would if a foreign dog enters your yard and this causes your dog to attack to get the intruder out.

Another issue is protection, dogs will protect their owners and everyone they consider members of their pack including children and other pets. If your dog feels that you are threatened by another dog it might attack to protect you.

Playing sometimes go to far and this can cause dogs to fight, dogs might simply be playing but then it goes too far and a play fight turns into a real fight. This often happens when there are more then two dogs involved.

Dominance is the cause of many dog fights. When there are two dogs and both of them are dominant and wants to be in charge then they might try to get the other dog to submission by attacking it.

There are also cases where two dogs simply do not get along. The dogs simply don’t like each others’ personality or behavior or even how the other dog smell. Just like us humans dogs have their personalities and their preferences and some dogs simply do not get along. The Breed of the dog can also be a factor when it comes to dog fights. Some breeds of dogs get along better with other dogs then others’ do. Dogs who are dominant and/or bred to fight (like the Pitbull Terrier) have a tendency to get aggressive towards other dogs.

Frustration is also a common cause of dog fights. A dog might get frustrated when it can not get what it wants and will sometimes take out its aggression on whatever (or whoever) is close to it. So a dog might attack another dog simply because it is frustrated with something else and the other dog simply happen to be in its reach.

How to break up a dog fight

It is very important to be able to break up a dog fight before one (or several) of the dogs get seriously injured. It is however important to do this the right way. You have to stop the dogs from fighting with getting injured yourself so here are a few tricks on how to do this.

First of all; do not get in between the dogs. This can be very dangerous and you risk getting bitten by any of the dogs in the fight, even your own dog. Dogs in rage and in the heat of the fight can’t be controlled easily and thus another way of stopping the fight must be applied. Here are a few ways to stop a dog fight.

How to prevent a dog fight 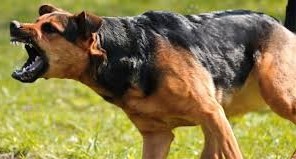 The best thing is of course to prevent a dog fight from happening in the first place. This might be easier said then done but there are signs you can look for. Learning the body language of dogs is very important. This will allow you to spot a situation which is potentially dangerous and stop a fight before it breaks out. Here are a few things to look for:

It is important to be prepared in order to deal with a dog fight. It is very important to get know your dog well. If you know your dog’s fear and what triggers aggression in it then you will have a much better chance of preventing a fight from happening in the first place. By studying dogs in general and learning their body language you will also be able to see if there are other dogs who display a behavior that might lead to a fight and thus pull away your own dog from there before a fight break out.

Of course, it is not always possible to prevent dog fights as sometimes fights occur very quickly. Therefore, you need to have a plan and know how to break up the fight as quickly as possible. Watch your dog closely when it is playing with other dogs and talk to the owner of the other dog (s) so that you can act together should it be necessary. It could also be useful to see if there is an object nearby (trashcan, bench, chair etc) that could be used to separate the two fighting dogs.

I hope you found this post useful and I would be very happy to hear your own suggestions and tips on how to break up a dog fight. Please leave your comments below.